Looking for writing advice? The internet has a ton waiting for you. You’ll find the good, the bad, and the downright odd a Google search away. My favorite odd advice? Edgar Alan Poe suggested that a writer better the story this way – “Include a beautiful woman with raven locks and porcelain skin, preferably quite young, and let her die tragically of some unknown ailment.” Or how about this gem from Kurt Vonnegut:

Some of what’s available is personal to that writer and may not apply to you. Not every writer drinks coffee or tea for that matter. Not every writer gets inspiration from the same sources. We don’t all write about the people we love. Don’t worry if some piece of advice you receive doesn’t relate to you. And when some if it is downright twee (like this glurge below) feel free to roll your eyes and move along.

(did I just call a Wordsworth quote glurge? Yup. ’cause it is.)

Then there’s the stuff that’s good as a guideline, like don’t use adverbs, but it clearly (wink) doesn’t apply in every situation.

All that being said, there are some universal bits of advice that I believe every writer needs so without further ado, here is the best advice I have received and found to be true regardless of what stage you’re at in the journey from idea to written novel.

Read. A lot. I’ll let Faulkner explain since he does it perfectly.

Keep writing.  Even when you don’t feel like it. Put your kiester in the chair and your fingers on the keys or your hand on the pen. Writer’s block is a myth. If you wait to feel like writing you will never finish a single book.

Grow a thick skin.  Feedback is vital to producing a book that people other than you want to read. Get a group of people that are willing to read your first draft – beta readers. Find yourself a Critique Partner (someone to trade novels with to get critical feedback) or hire yourself a darn fine content editor. I did all three. Speaking of which, that first edit letter is going to kick you in the squishy bits of your soul. It’s gonna hurt to hear that the sentences you spent weeks crafting, slowly falling in love with your own words, are precisely the ones your editor wants to set fire to. She may even highlight three whole paragraphs and comment with only ‘meh’. Sometimes the main character you think is a witty, sarcastic delight your editor or even publisher, will think is a shrew. You’re gonna need to listen. You don’t have to make every change your editor recommends, but you’ll need to defend your choice so save that spine for when it matters. Let the little stuff go. And get used to it. Every book is going to go through that excruciating editing process. 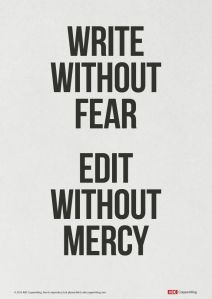 Don’t give up. Rejection is part of the process. The chances of you landing a literary agent with the first query letter you send are slim. Same if you’re querying publishers directly. I was turned down by at least six agents before I decided my book might be too niche and I submitted directly to publishers. It took a lot of research and several queries before I found a publisher. And finding a publisher or landing the lit agent isn’t the final stop. Not by a long shot. You’ll still have to help sell the thing. Your first book may not hit. Mine hasn’t. Ouch. It’s gotten good reviews, but my lack of a readership, no street team to speak of, and general marketing ignorance hurt it’s chances. Book two’s in the can and will be out in a few months so I’ve got a re-do. Don’t let one failure discourage you. Heck, don’t let ten failures discourage you. There have been authors who have had to start over with new rep, new publisher, multiple times. Even the stars of the literary world experience rejection. Keep writing. 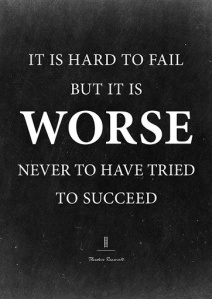 Don’t compare. Ever. Everyone’s writing journey is different. It can be hard to look at the success of author friends who have hit with their books, or get representation before you, or get better deals at bigger publishers. Or get movie deals, or get faboo reviews from a reviewer that dissed you. Don’t take out your ruler and measure. It’s a huge mistake. Celebrate your success and congratulate your peers for theirs. What’s yours is yours alone.

For newbie authors I am putting together a more complete guide to the stuff you should know before you send your first query letter. And for my fellow debut authors I’m putting together a post on everything I wish someone had told me before my first book published. So watch this space.

Blessings on you all. Go write something.