In the business world as well as the creative industries there’s something called the ‘elevator pitch’. It’s a way to summarize your project for a prospective customer/agent/publisher/producer. The idea is to make the pitch concise enough to fit the length of a ride in an elevator from one floor to the next. It’s something that writers have to develop in order to promote their work and it’s something I am terrible at.

I don’t generally do concise. In my day-job world I’ve had to learn to curb my verbose tendencies. My six paragraph, heavily-researched emails have long since turned into bullet points and brief phrases. But in my writing life? Not so much. Pitches are important though so when I was on the spot to offer one a few weeks ago (and I’m not sure how well I did) I knew it was time to sit down and really think about what The Broken Trail is about and how to communicate that in just a few words.

It’s a contemporary, Christian romance, but what else is it? I’ve never written a book with genre predominantly on my mind. Every book I’ve ever written (it’s up to three now) I’ve started with a character and a seed of a plot. First book was Kennedy and her recovery from a trauma. Second book was Elsa and her secret identity. Neither of these books has seen the light of day. The Broken Trail started the same way though – Katherine popped into my head almost fully-formed. “What if a highly-intelligent, privileged, but wounded woman went to teach in the rural North Woods of Maine?” That was the seed that started it all.

Now that the seed is a fully-formed flower I have to find a way to describe it that makes someone want to read it. To describe a morning glory one might say it’s an Impomea, a typically annual climber with trumpet-shaped flowers, but would that do justice to this? 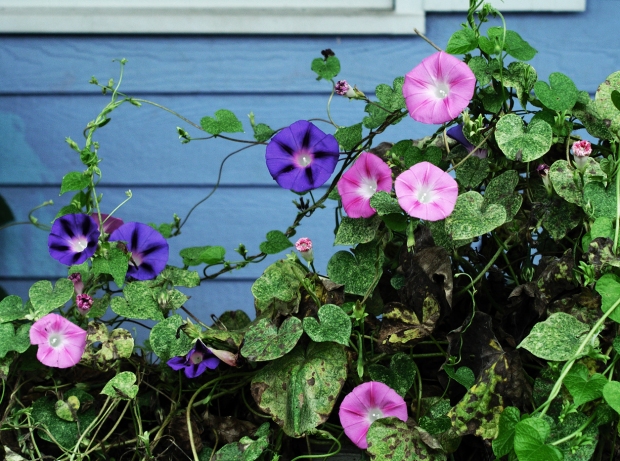 Nope. My first few tries at an elevator pitch were just as inadequate.

The book is a love story, sure, but it’s also a story of transformation. Katherine has to change in order to find love with Mac, She has to forgive an old hurt in order for it to heal. It’s a painful lesson many of us have to endure over and over again until we finally accept it. There are people out there who will hurt us and never apologize, never be held accountable for their sin against us. It’s human to refuse to forgive them, but that impulse leads to bitterness and in the end poisons our lives.

If I was into tattoos at all I’d put “Forgive and Be Free” somewhere on my person as a reminder of how good it feels to let go of anger, resentment, and bitterness. It wasn’t until I was well into my twenties that I finally got it, that God had forgiven me for every evil thought and deed so who was I to keep my forgiveness from anyone else? Letting go of the wounds from what was at times, a difficult past, was like gaining wings. The happiness that followed was a bonus I never expected. If you’d asked people who knew me then they would probably say it was about the time I stopped wearing all black. And they’d be right. Color came back into my life when I learned to let go and forgive.

These days I am still the same angry creature of my youth, but it’s brief. I flash, flare, and flame out. I can’t keep a hold of a grudge, or remember a slight, or stay worked up about a hurt I’ve suffered.  It’s not because I’m so perfect, my family can tell you that. I’m quick-tempered, occasionally exacting, and frequently anxious. I am a sinner who has been redeemed, not sin-less, a work in progress.  But I can forgive because Jesus lives in me and He has absolutely no time for that nonsense. Who am I to hold a grudge when the maker of heaven and earth has seen fit to forgive me?

As Forgiveness is a main theme in The Broken Trail, so is Love in all its forms: eros, agape, phileo, storge. There’s something important to know about love. 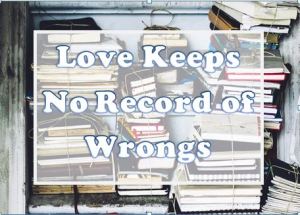 That list you have in your head that you pretend isn’t there? Time to cross it off and throw it away.  This doesn’t mean that you loan money to your gambling cousin again or you restore ties to your ex-boyfriend who hurt you so badly, it means that you let go of that hurt and forgive them as you have been forgiven. And, like Katherine (or Elsa), you let it go.

Now, after all this discussion you might be wondering if I ever did come up with an elevator pitch for my book?  Finally, I settled on this: Katherine Grant is a woman with everything but peace. In a tiny town in the mountains of Maine she tries to find it in her budding love for the town’s police captain, but she learns that she has to deal with the brokenness of her soul before she can truly offer her heart to anyone.

Sound off in the comments and let me know what you think!